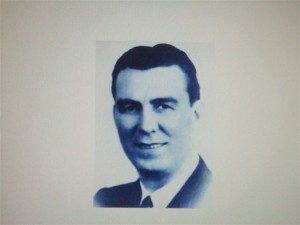 Born on November 9, 1897, on a Grundy County, Iowa farm, Clayton Folkerts was a self-taught designer, builder and pilot of early airplanes.  Experimenting with designs and materials found on the family farm, he constructed five home-built aircraft from 1916 to 1926.

Clayton distinguished himself in the airplane design field with the successful production of the Monocoupe. Working at Central States Aero in Davenport for $35 a week, he taught himself to weld and solely built the Monocoupe prototype in 4 1/2 months.

The Monocoupe was a side-by-side enclosed cockpit airplane designed for high performance using relatively little horsepower. It was put into production in Bettendorf, Iowa and later in Moline, Illinois.

By the end of 1928, 90% of all light planes and 10% of all licensed airplanes owned in the U.S. were Monocoupes.  Even Col. Charles Lindbergh ordered a Monocoupe equipped with brakes.  By 1930, air races were dominated by Monocoupes.  The Monocoupe 90, another Folkerts design, was a streamlined version of the original aircraft and remained in production from 1930 to1950.

Clayton’s later designs were centered on racing planes. His Speed King 2 won national titles from 1936 to1938. The “Jupiter” won several air races in 1937. During WWII, Clayton was a project manager in Ohio for the development of trainers and assault gliders.

In 1948, Clayton returned to Iowa and farmed near Bristow. After retiring in 1950, he moved to an acreage near Iowa Falls and lived there 14 years before he passed away in 1964.